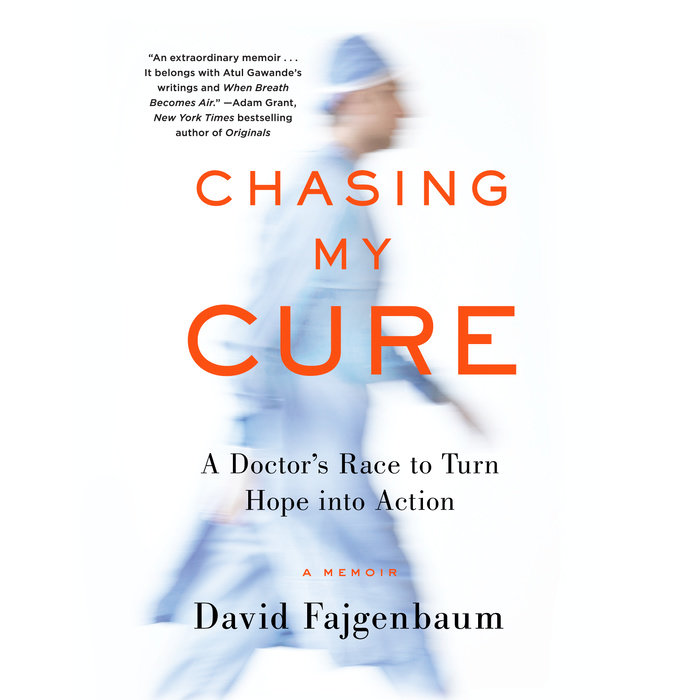 The powerful memoir of a young doctor and former college athlete diagnosed with a rare disease who spearheaded the search for a cure—and became a champion for a new approach to medical research.

David Fajgenbaum was a former Georgetown quarterback nicknamed the Beast in medical school, where he was also known for his unmatched mental stamina. But things changed dramatically when he began suffering from inexplicable fatigue. In a matter of weeks, his organs were failing and he was read his last rites. Doctors were baffled by his condition, which they had yet to even diagnose. Floating in and out of consciousness, Fajgenbaum prayed for the equivalent of a game day overtime: a second chance.

Miraculously, Fajgenbaum survived—only to endure repeated near-death relapses from what would eventually be identified as a form of Castleman disease, an extremely deadly and rare condition that acts like a cross between cancer and an autoimmune disorder. When he relapsed while on the only drug in development and realized that the medical community was unlikely to make progress in time to save his life, Fajgenbaum turned his desperate hope for a cure into concrete action: Between hospitalizations he studied his own charts and tested his own blood samples, looking for clues that could unlock a new treatment. With the help of family, friends, and mentors, he also reached out to other Castleman disease patients and physicians, and eventually came up with an ambitious plan to crowdsource the most promising research questions and recruit world-class researchers to tackle them. Instead of waiting for the scientific stars to align, he would attempt to align them himself.

More than five years later and now married to his college sweetheart, Fajgenbaum has seen his hard work pay off: A treatment that he identified has induced a tentative remission and his novel approach to collaborative scientific inquiry has become a blueprint for advancing rare disease research. His incredible story demonstrates the potency of hope, and what can happen when the forces of determination, love, family, faith, and serendipity collide.

“A page-turning chronicle of living, nearly dying, and discovering what it really means to be invincible in hope.”—Angela Duckworth, #1 New York Times bestselling author of Grit
Read More
“Moving . . . A powerful, highly personal chronicle of a doctor’s feverish rush to find a cure for the disease that afflicts him. . . . Offering a distinctively uncommon perspective on disease and doctoring, Fajgenbaum also writes earnestly and frankly about the unique brand of humility one must accept as a medicinal healer with a mysterious, possibly deadly malady.”—Kirkus Reviews

“Dr. Fajgenbaum tells his own remarkable story of fighting a mysterious, nearly fatal multisystem disease, and of his brilliant deduction that a long-known drug may be the cure.  This book—part detective story, part love story, part scientific quest—shows how one indefatigable physician can bring hope to patients who suffer from a rare disease.”—Michael S. Brown, MD, recipient of the Nobel Prize in Medicine, 1985

“This is a remarkable and gripping story. Dr. Fajgenbaum’s description of his journey is a tale of courage, dedication, and brilliance that will enthrall and fascinate its readers.”—Arthur H. Rubenstein, professor of medicine, Perelman School of Medicine, University of Pennsylvania

“Chasing My Cure is a medical thriller that grapples with penultimate stakes—real love, bedrock faith, and how we spend our time on earth. Fast-paced and achingly transparent, David Fajgenbaum's deeply thoughtful memoir will have you rethinking your life's priorities.”—Lynn Vincent, #1 New York Times bestselling co-author of Heaven is for Real and Indianapolis

“Chasing My Cure is the riveting story of Dr. Fajgenbaum’s remarkable journey persevering through illness to medical discoveries and recovery. It is also a tribute to his rare spirit and intellect, the support of his family and friends, the power of modern science, and the role that patients can play to find new treatments.”—J. Larry Jameson MD, PhD, dean, Perelman School of Medicine, University of Pennsylvania

“This is a fascinating true-life story of a young doctor, stricken with a rare, life-threatening disease, who takes matters into his own hands and, with total focus, finds a cure. . . . An informative and inspiring read.”—Andrew Weil, MD

“I was riveted from the very first to the very last page of this extraordinary story of life, assumed death, resilience, and hope. I am convinced that through his incredible journey, David Fajgenbaum has acquired ‘superpowers’ that will no doubt shape the lives of others.”—Nicole Boice, founder Global Genes

“Chasing My Cure is an extremely powerful story about turning fear into faith, and hope into action. David Fajgenbaum’s ferocious will to survive and his leadership in the face of his rare disease provides a model pathway for others searching for cures of their own to follow.”—Stephen Groft, Pharm.D., former director, Office of Rare Diseases Research, National Institutes of Health
Read More