- Penguin Audio -
Written By: Bret Witter and Chris Wilson
Read By: Wes Moore and Chris Wilson
22.50
Unabridged Download
-9781984840363 -
*Manufacturerâ€™s Suggested Retail Price. See retailer for details.
The Master Plan
My Journey From Life in Prison to a Life of Purpose 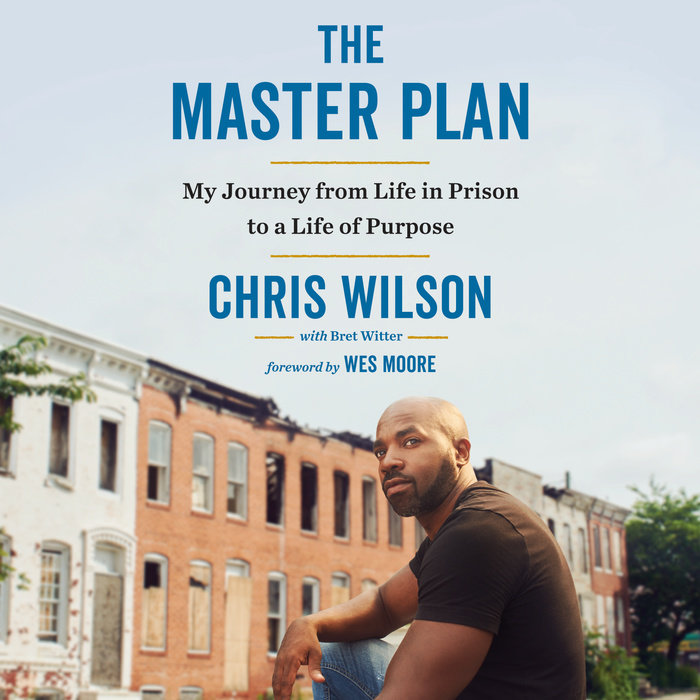 The inspiring, instructive, and ultimately triumphant memoir of a man who used hard work and a Master Plan to turn a life sentence into a second chance.

Growing up in a tough Washington, D.C., neighborhood, Chris Wilson was so afraid for his life he wouldn't leave the house without a gun. One night, defending himself, he killed a man. At eighteen, he was sentenced to life in prison with no hope of parole.

But what should have been the end of his story became the beginning. Deciding to make something of his life, Chris embarked on a journey of self-improvement--reading, working out, learning languages, even starting a business. He wrote his Master Plan: a list of all he expected to accomplish or acquire. He worked his plan every day for years, and in his mid-thirties he did the impossible: he convinced a judge to reduce his sentence and became a free man. Today Chris is a successful social entrepreneur who employs returning citizens; a mentor; and a public speaker. He is the embodiment of second chances, and this is his unforgettable story.
Read More
Praise for The Master Plan

“Inspiring without being preachy, Wilson’s manifesto will greatly appeal to today’s youth.”—Publishers Weekly

“Uplifting...Wilson candidly shares the eye-opening details of his time in prison with a prose style that moves with directness and refreshingly unfettered honesty...A smoothly written memoir steeped in positive reinforcement and hope for the future.”—Kirkus Reviews

“Wilson’s voice comes through loud and clear in this memoir that should have wide appeal.”--Library Journal

"The Master Plan is less of a roadmap and more of a philosophy that we should all take to heart: we are all better than our worst decision, our sense of justice should honor the redemptive possibilities inherent in every person, and our destinies are truly intertwined.”—Wes Moore, author of The Other Wes Moore

“An incredibly moving book that will change the way you look at the criminal justice system.”—Senator Bernie Sanders

“This is a brave book, full of thought-provoking insight on criminal justice, the modern prison system, and the possibility of redemption. And yet what sticks with me most is the beautiful, heartbreaking mother-son relationship....Thank you, Chris Wilson, for taking us into the cave, so that we can better understand the light.”—Beth Macy, bestselling author of Dopesick and Factory Man

“I’ve admired Chris Wilson’s work with the underprivileged and returning citizens for the last three years, but as this book proves, you don’t really know a man until you understand his struggle. Do not miss this story of redemption, empowerment and giving back. It can change your life.”—Van Jones, TV show host and author of Beyond the Messy Truth

“The Master Plan adds a personal narrative to Michelle Alexander’s The New Jim Crow, making it equally important. Chris Wilson is our generation’s go-to voice on mass incarnation and redemption. Not only does he brilliantly articulate his struggle, he offers a clear path to what needs to be done if we truly want reform. The difference between Wilson and other scholars is that he doesn’t only talk about the ills of the system––he’s survived that system and changed his life, and now spends his time helping other people do the same. This book will change the world.”—D Watkins, bestselling author of The Beast Side and The Cook Up

“A bright light in a moment of moral darkness. Chris Wilson’s story is both a triumph and a call to arms on behalf of the incarcerated.”—Nathalie Molina Niño, CEO of BRAVA Investments and author of Leapfrog
Read More