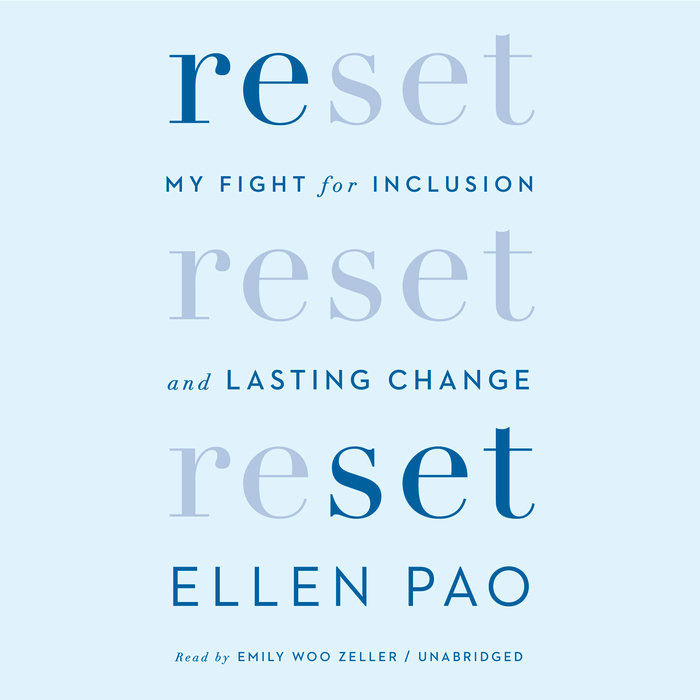 In 2015, Ellen K. Pao sued a powerhouse Silicon Valley venture capital firm, calling out workplace discrimination and retaliation against women and other underrepresented groups. Her suit rocked the tech world—and exposed its toxic culture and its homogeneity. Her message overcame negative PR attacks that took aim at her professional conduct and her personal life, and she won widespread public support—Time hailed her as “the face of change.” Though Pao lost her suit, she revolutionized the conversation at tech offices, in the media, and around the world. In Reset, she tells her full story for the first time.

The daughter of immigrants, Pao was taught that through hard work she could achieve her dreams. She earned multiple Ivy League degrees, worked at top startups, and in 2005 was recruited by Kleiner Perkins, arguably the world’s leading venture capital firm at the time. In many ways, she did everything right, and yet she and other women and people of color were excluded from success—cut out of decisive meetings and email discussions, uninvited to CEO dinners and lavish networking trips, and had their work undercut or appropriated by male executives. It was time for a system reset.

Ellen K. Pao’s Reset is a rallying cry—the story of a whistleblower who aims to empower everyone struggling to be heard, in Silicon Valley and beyond.

“[Reset delineates] the very fine line that a professional woman in a male-dominated field will, at some point, most likely find herself treading: ‘Is it possible that I am really too ambitious while being too quiet while being too aggressive while being unlikable?’ . . . The genteel chauvinism of the enlightened elites at Kleiner Perkins . . . carried with it the sting of betrayal. They promised her a meritocracy and gave her a glass ceiling instead: ‘It just wasn’t fair.’ She’s right.”—The New York Times Book Review

“If Sheryl Sandberg’s Lean In has been the handbook for the rising female executive over the last decade, Ellen Pao’s book [Reset] is its logical companion and should be read alongside it as a staple in every business course.”—Wired

“[Ellen Pao’s] bravery in filing the lawsuit made her a hero to many women and helped change the conversation around sexism in tech. Now, Pao is back . . . with a new book, Reset, which takes readers behind the scenes of the roller coaster she’s been on.”—Marie Claire

“The gender discrimination trial that rocked Silicon Valley may be long over but [Ellen Pao’s] fight is not. And [she] has a message for the white male-dominated tech industry: It’s time for a ‘reset.’ . . . [Reset] is Pao’s defiant post-mortem on her tenure at Kleiner Perkins Caufield & Byers and the stormy courtroom battle that followed.”—USA Today

“Ellen Pao was one of the earliest voices sounding the alarm about bias and discrimination in the tech world.Reset explores the all-too-common challenges she faced and provides an instructive blueprint for equity and fairness.”—Katie Couric

“In [Reset,] Ellen Pao details both the necessity and cost of speaking up. She has been open in discussing the challenges she faced as a woman of color trying to foment change in Silicon Valley.”—Lindy West, The New York Times

“Powerful . . . Sexism in the tech industry is real, pervasive and extremely damaging, as . . . Ellen Pao’s forthcoming book makes clear. . . . There can be no conversation about women in tech without tackling the issue head-on. And thanks to Pao’s lawsuit, that’s what’s been happening for the past few years. . . . Pao opened the floodgates.”—HuffPost

“Ellen Pao [is] a phenomenal woman. . . . For anyone who cherishes the illusion that the tech industry is somehow superior to, say, investment banking, Pao’s book will come as a shock. . . . They say a fish rots from the head down. Same goes for Silicon Valley.”—The Guardian

“Vivid [and] fascinating reading . . . The Broadsheet covered the Pao trial extensively, but it's a very different experience to read her words now. . . . Her willingness to come forward paved the way for [other] whistleblowers. . . .  The ‘Pao effect’ . . . is real—and, it seems, just beginning to make its influence felt.”—Fortune

“When women assert ourselves, we confirm the bias against us, unconscious and otherwise. When we speak out, we identify ourselves as troublemakers. This is why I look forward to reading Ellen Pao’s account of her tribulations in Silicon Valley.”—Catherine Mayer, New York Times

“Ellen Pao courageously confronted Silicon Valley’s venture capital world by calling out bias and discrimination. She emerged from a public trial, media frenzy, and a fierce battle against online harassment with her strength, spirit, and voice intact. In Reset, with deep intelligence and a gift for storytelling, Pao movingly and passionately recounts her path to activism and advocacy. Her book offers a rare glimpse into the gender roles and stereotypes that still pervade one of the world’s most profitable trading centers.”—Henry Louis Gates, Jr.

“[In Reset,] Pao shares her story—the fascinating arc of her career and the bias and discrimination she encountered along the way, from Harvard Business School up through her time as CEO of Reddit. . . . To women throughout the tech industry—and to women in similarly male-dominated fields—she was a hero.”—Mashable

“Ellen Pao draws back the curtain in a book that will likely roar through Silicon Valley and beyond. She reveals in detail her experiences as a woman working in the world of tech and gives voice to the experiences of women working across many professions in America today. Writing transparently was courageous, and Pao is hoping it will help people of all backgrounds rise. This woman has guts.”—Ann Curry
Read More

6 Audiobooks for Women in Business