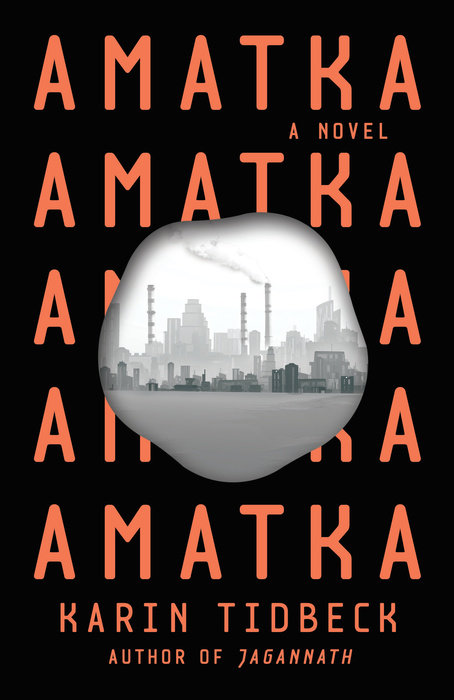 A surreal debut novel set in a world shaped by language in the tradition of Margaret Atwood and Ursula K. Le Guin.

Vanja, an information assistant, is sent from her home city of Essre to the austere, wintry colony of Amatka with an assignment to collect intelligence for the government. Immediately she feels that something strange is going on: people act oddly in Amatka, and citizens are monitored for signs of subversion.

Intending to stay just a short while, Vanja falls in love with her housemate, Nina, and prolongs her visit. But when she stumbles on evidence of a growing threat to the colony, and a cover-up by its administration, she embarks on an investigation that puts her at tremendous risk.

In Karin Tidbeck’s world, everyone is suspect, no one is safe, and nothing—not even language, nor the very fabric of reality—can be taken for granted. Amatka is a beguiling and wholly original novel about freedom, love, and artistic creation by a captivating new voice.
Read More
“Tidbeck excels in drawing small details that send a chill up the spine—and turn this dystopian novel into a fine piece of horror-weird fiction.” —The Washington Post, “The best science fiction and fantasy books to read this month”

“Unique, with a strong and compelling voice…. A book to get lost in, highly recommended for lovers of modern fiction.” —SFBook Reviews

“What elevates [Amatka] is the skill of Tidbeck’s execution and the sheer weirdness of a world in which the very building blocks of reality depend so completely on how we perceive them.” —New Scientist

“Reading [Amatka] is a remarkable exercise in which the borders of perception and communication fluctuate and bend…. A parable like those of Franz Kafka…. Amatka possesses the qualities of a fable and the febrile brilliance of weird fiction at its most inventive and self-questioning.” —Weird Fiction Review

“In her brilliant and bizarre novel Amatka, Karin Tidbeck evokes with quiet precision a dystopian reality that becomes more eerie by the page. The lines blur between fabrication and truth, between annihilation and creation, between bureaucratic obedience and heroic defiance. This book will grip you and move you. Though Amatka may be a fantastical place, we should all heed its warnings.” —Helen Phillips, author of The Beautiful Bureaucrat

“Tidbeck sets up a world rife with mystery…. [Amatka] calls to mind Ursula K. Le Guin’s…speculative fictions of social unrest…. The comparison would be daunting for a writer of lesser gifts, lesser gumption, but Tidbeck invites it, boldly.” —Bookforum

“This is a story about the way reality crumbles—a timely and troubling novel that ranks among the best works of queer science fiction.” —Slate

“A phenomenal and wholly original work from a writer to watch, Amatka is a book that is truly out of this world.” —Bustle

“Compelling. . . . I recommend that you lay your hands on a copy.” —Ann Leckie, author of Ancillary Justice

“Tidbeck's haunting world made of words is undeniably disturbing and provocative.” —The Chicago Tribune

“A fresh dystopian twist. . . . Tidbeck's first novel, translated by the author from her native Swedish, is grim, spare, and fascinating.” —Library Journal

“Karin Tidbeck’s Amatka is a stunning, truly original exploration of the mysteries of reality and what it means to be human. It’s brutally honest and uncompromising in its vision—a brilliant short story writer has been revealed as an even more brilliant novelist. One of my favorite reads of the past few years, an instant classic.” --Jeff VanderMeer, author of the Southern Reach trilogy

“Tidbeck reimagines reality and the power of language in her dystopian sci-fi novel. . . . Tidbeck introduces the mysteries and mechanics of her world slowly while leaving the origins of these pioneers opaque. Her ending takes a turn into much weirder territory, but her tense plotting, as well as the questions she raises about language, control, and human limits make this a very welcome speculative fiction novel.” —Publishers Weekly

“Karin Tidbeck is a brilliant conjurer of worlds, a fabulist armed with an imagination as fiercely strange as any I have ever encountered. Her fiction is built on a foundation of improbabilities and even outright impossibilities, and if you surrender to its increasingly bold claims on reality you will walk away surprised, thrilled, and in all likelihood changed forever.” —Matt Bell, author of Scrapper
Read More