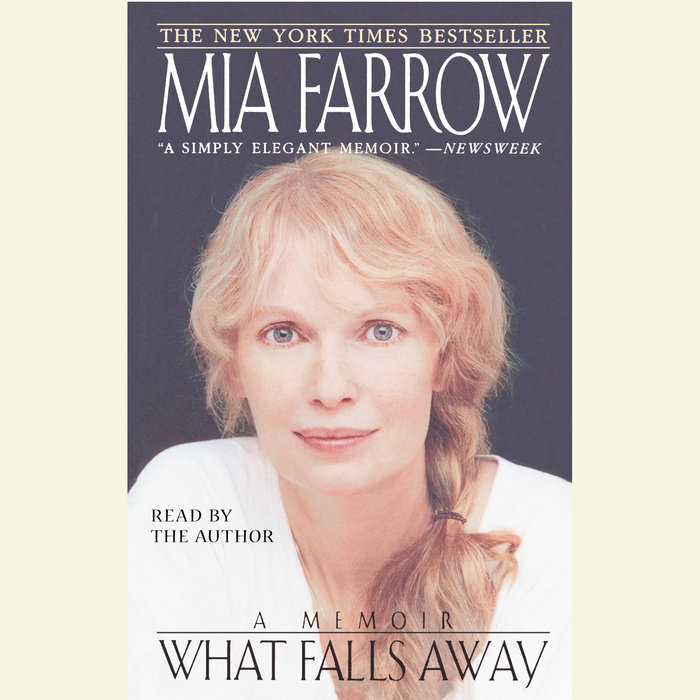 In an exquisitely written memoir, Mia Farrow introduces us to the landscapes of her extraordinary life.  Moving from her earliest memories of the walled gardens and rocky shores of western Ireland and her Hollywood childhood to her career as an actress, she writes of these experiences and her struggle to protect her children in a painful custody battle with Woody Allen.  It was this crisis that led her to reflect upon the incidents that had brought her to a place so incomprehensible.  Now, in What Falls Away, a memoir resonant not only in its honesty but also in its beautifully crafted prose, Mia Farrow speaks for the first time.

She was born the third of seven children to the beautiful actress Maureen O'Sullivan and successful writer/director John Farrow, but the isolation of a polio ward brought her childhood to an abrupt end at the age of nine.  Several years later, two deaths shattered the security of the family forever, and Mia Farrow embarked upon a journey that would lead her away from the convent education that was to sustain her spiritual courage, to starring roles in Peyton Place and Rosemary's Baby, a marriage to Frank Sinatra, divorce, a defining trip to India, work on the London stage and in film, and marriage to André Previn.  Their life together in England brought them three sons and three daughters before that marriage, too, dissolved and she returned to the United States.

The year 1979 saw the beginning of a new career with brilliant performances in thirteen of Woody Allen's most distinguished films.

Told with grace and deep understanding, as well as humor, What Falls Away goes beneath the surface of this amazing life, with all its drama, success, and pain, and exposes the inner workings of a mind and spirit for whom truth, compassion, and faith are essential.

Mia Farrow's story is ultimately one of hope and courage in the face of difficulty; of commitment to others--most important of whom are her children; and of spiritual strength.  Readers will not easily forget this remarkable book, even long after the last page has been turned.
Read More
“A simply elegant memoir.”—Newsweek

“Compelling and convincing . . . a story of survival.”—Chicago Tribune

“A juicy book and a good one.”—Time

“Farrow’s book possesses an elegance of prose and sensibility that elevates it way beyond the typical gorefest of sex, gossip, and betrayal.”—USA Today

“A stellar new memoir . . . it’s all there, every wondrous, scandalous, inhumanely difficult thing.”—Mirabella

“Mia Farrow tells the story of her fascinating life with uncommon grace and insight.”—William Styron

“One of the best writers to ever come out of Hollywood. She writes with extraordinary wit and polish. This is good news from Frank Sinatra, André Previn, and the hundreds of other celebrities who make cameo appearances in her fabulous life, but it is very bad news for Woody Allen.”—Pat Conroy
Read More