- Penguin Audio -
Written By: Gertrude Bell
Read By: Adjoa Andoh and Sian Thomas
20
Unabridged Download
-9780451482020 -
*Manufacturerâ€™s Suggested Retail Price. See retailer for details.
A Woman in Arabia
The Writings of the Queen of the Desert 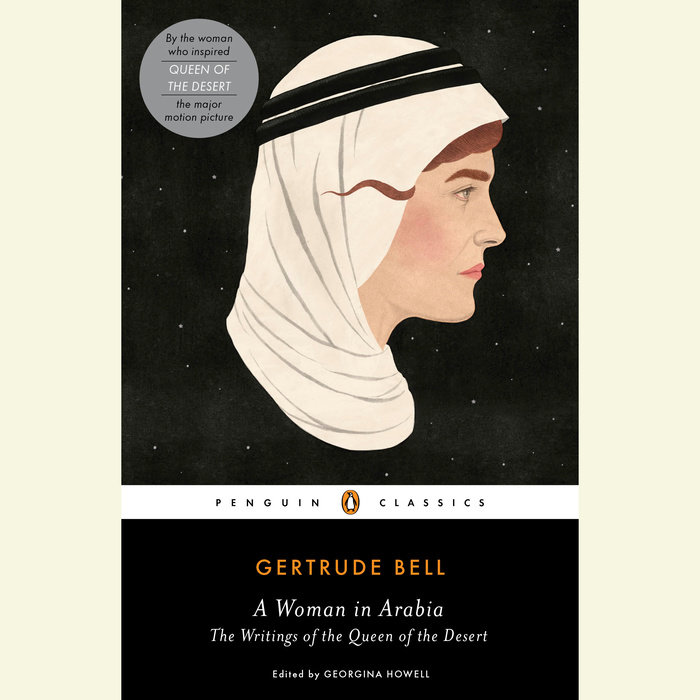 A portrait in her own words of the female Lawrence of Arabia, the subject of the PBS documentary Letters from Baghdad, voiced by Tilda Swinton, and the major motion picture Queen of the Desert, starring Nicole Kidman, James Franco, Damian Lewis, and Robert Pattinson and directed by Werner Herzog

Gertrude Bell was leaning in 100 years before Sheryl Sandberg. One of the great woman adventurers of the twentieth century, she turned her back on Victorian society to study at Oxford and travel the world, and became the chief architect of British policy in the Middle East after World War I. Mountaineer, archaeologist, Arabist, writer, poet, linguist, and spy, she dedicated her life to championing the Arab cause and was instrumental in drawing the borders that define today’s Middle East.

As she wrote in one of her letters, “It’s a bore being a woman when you are in Arabia.” Forthright and spirited, opinionated and playful, and deeply instructive about the Arab world, this volume brings together Bell’s letters, military dispatches, diary entries, and travel writings to offer an intimate look at a woman who shaped nations.

For more than seventy years, Penguin has been the leading publisher of classic literature in the English-speaking world. With more than 1,800 titles, Penguin Classics represents a global bookshelf of the best works throughout history and across genres and disciplines. Readers trust the series to provide authoritative texts enhanced by introductions and notes by distinguished scholars and contemporary authors, as well as up-to-date translations by award-winning translators.
Read More
“A fascinating read . . . The story that emerges is thought-provoking. . . . Gertrude’s legacy makes easy parallels to the present, from world powers trying to determine the political shape of the Middle East to women’s struggles to be taken seriously by male colleagues. In A Woman in Arabia, she faces it all with humor, passion, and candor; even a century on, she’s a woman worth knowing.” —NPR.org

“[A] well-chosen selection from [the] letters and memoirs [of] one of the most remarkable figures of the late 19th and early 20th century . . . Bell might be regarded as the much happier, female equivalent of T. E. Lawrence, who knew and admired her.” —The Washington Post

“I hope this collection of Bell’s prose, more than the upcoming film by Werner Herzog, stirs up controversy about her time as an archaeologist and spy and spearhead of post-WWI British policy in the Middle East, the effects of which can still be felt today.” —Jonathan Sturgeon, Flavorwire’s “10 Must-Read Books for August”

“Luckily for those of us who are unfamiliar with Gertrude Bell, there comes A Woman in Arabia . . . a collection of Bell in her own words, helpfully annotated.” —The Daily Beast

“Bell’s letters . . . are as rich in ethnographic detail as any of the great nineteenth-century European travelogues, but chattier—devoid of the heroic rhetoric of T. E. Lawrence’s Seven Pillars of Wisdom. . . . [They] capture both her charisma and the intensely social character of her time in the Middle East. Like the State Department cables released by WikiLeaks in recent years, Bell’s archive of correspondence is a reminder of the daily disorder obscured by other political documents: maps, treaties, bulletins.” —The New Yorker

“A fascinating glimpse at [Bell’s] larger-than-life personality . . . Timely and timeless . . . The genius of this collection is letting Bell tell her story in her own words—just as her fiercely independent spirit would have wanted. Impossible to put down, the book reads a bit like a travelog, part humorous wit and part educational lecture, allowing the reader an in-depth look at the life of a true heroine and the time period she inhabited and conquered. . . . A must-have for every library.” —Library Journal, starred review

“Tantalizing . . . Fascinating . . . Bell’s own words showcase . . . a personality and intellect that glittered like the sun-drenched Arabian sands. . . . Readers will accompany her on some of her most daring exploits. . . . This is a nifty little volume that illuminates a remarkable life.” —Publishers Weekly

“Her letters are exactly herself—eager, interested, almost excited. . . . She kept an everlasting freshness; or at least, however tired she was, she could always get up enough interest to match that of anyone who came to see her. I don’t think I ever met anyone more entirely civilized, in the sense of her width of intellectual sympathy.” —T. E. Lawrence
Read More