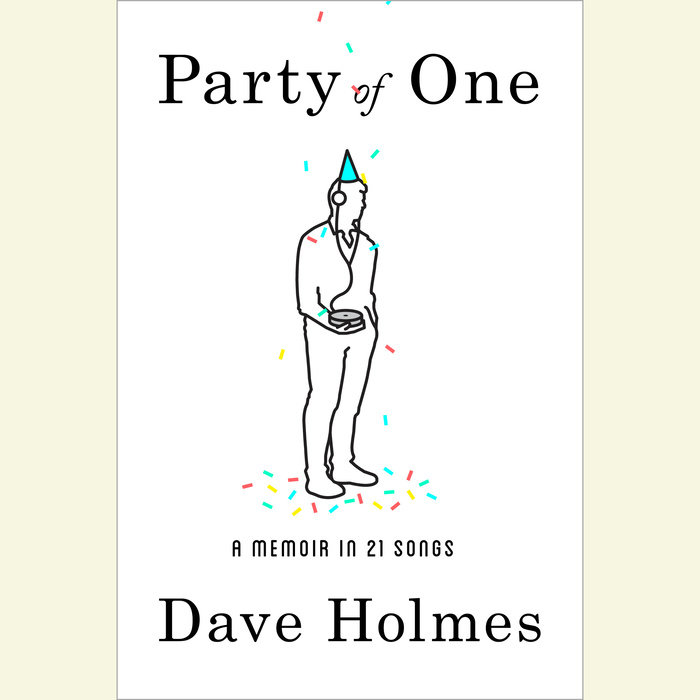 From former MTV VJ Dave Holmes, the hilarious memoir of a perpetual outsider fumbling towards self-acceptance, with the music of the '80s, '90s, and today as his soundtrack

Dave Holmes has spent his life on the periphery, nose pressed hopefully against the glass, wanting just one thing: to get inside. Growing up, he was the artsy son in the sporty family. At his all-boys high school and Catholic college, he was the closeted gay kid surrounded by crush-worthy straight guys. And in his twenties, in the middle of a disastrous career in advertising, he accidentally became an MTV VJ overnight when he finished second, naturally, in the Wanna Be a VJ contest, opening the door to fame, fortune, and celebrity—you know, almost.

In Party of One, Holmes tells the hilariously painful and painfully hilarious tales—in the vein of Rob Sheffield, Andy Cohen, and Paul Feig—of an outsider desperate to get in, of a misfit constantly changing shape, of a music geek who finally learns to accept himself. Structured around a mix of hits and deep cuts from the last four decades—from Bruce Springsteen's "Hungry Heart" and En Vogue's "Free Your Mind" to LCD Soundsystem’s “Losing My Edge” and Bleachers’ “I Wanna Get Better”—and punctuated with interludes like "So You've Had Your Heart Broken in the 1990s: A Playlist" and “Notes on (Jesse) Camp,” this book is for anyone who's ever felt like a square peg, especially those who have found their place in the world around a band, an album, or a song. It's a laugh-out-loud funny, deeply nostalgic story about never fitting in, never giving up, and letting good music guide the way.

“Exceptionally funny and memorable…. This memoir will fill your summer with nostalgia, music, and laughter.”
—Bustle (13 New Memoirs to Read This Summer)

“Holmes is all charm, and his self-deprecating style makes his story relatable and engaging without feeling self-involved. A hilarious and touching coming-of-age story that will strike a particular nerve among Generation Y.”
—Kirkus Reviews

"While [Holmes is] inarguably a funny guy, he’s also a thoughtful one who has interesting things to say about life away from the camera. And saying them, he’s always good company. Welcome to his party.”
—Booklist

“In Party of One, Dave Holmes goes deep into all the ways loving music warps you for life, from shaping your teen crush on Huey Lewis to putting you on MTV at the peak of the TRL era. But his book is also a tenderly hilarious and moving tale of trying to grow up—whether that means coming out at your Catholic college, hitting the hot tub with Kid Rock, or getting that sensation that the singer on your radio is the only soul who truly understands you.”
—Rob Sheffield, New York Times bestselling author of Love Is a Mix Tape

“Who better to marry great storytelling with great songs? Dave Holmes’s love of music and pop culture is infectious, and his stories are hilarious!”
—Andy Cohen, New York Times bestselling author of Most Talkative

“Party of One speaks a secret language to those of us who grew up at a time when being different was something to be hidden rather than celebrated.  Holmes’ masterful wit and colorful storytelling never obscures the soulful honesty  underneath—which is exactly the lesson we “different” kids learned to live with. Fantastically fun and captivating.”
—Josh Kilmer-Purcell, New York Times bestselling author of I Am Not Myself These Days

“Party of One is a perfect memoir—hilarious, moving, and full of beauty. Holmes writes at all times with great heart, brains, and courage.”
—Darin Strauss, National Book Critics Circle Award–winning author of Half a Life

“I love this book. I felt so many of the things that Holmes describes with grace and candor, from our shared pop culture shorthand to our nearly unbearable love of music. There are also a million jokes packed in here. I went over each paragraph to laugh again and again.”
—Margaret Cho, bestselling author of I’m the One That I Want

“While the soundtrack to Dave Holmes' young life may have been primarily composed of American and British Top 40, his glorious attention to detail has more in common with Bach. And I mean Johann Sebastian Bach, not the lithe, sexy bigot who sang for Skid Row. This is an exquisite music memoir that easily fulfills its goals of entertaining people young and old and helping them figure out where the hell they fit in.”
—Rob Delaney

This Is The Author | Dave Holmes