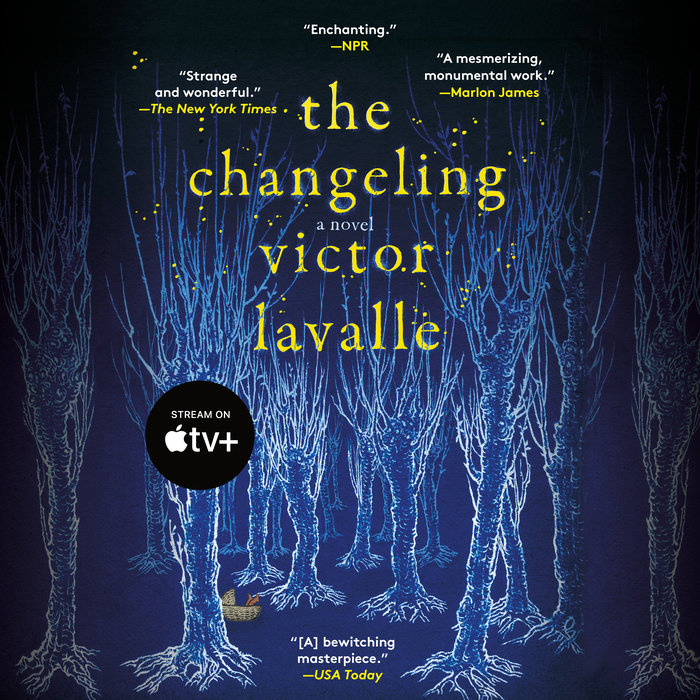 “[This] haunting tale weaves a mesmerizing web around fatherhood, racism, horrific anxieties and even To Kill a Mockingbird. And the backdrop for this rich phantasmagoria? The boroughs of New York.”—The New York Times

When Apollo Kagwa’s father disappeared, he left his son a box of books and strange recurring dreams. Now Apollo is a father himself—and as he and his wife, Emma, settle into their new lives as parents, exhaustion and anxiety start to take their toll. Apollo’s old dreams return and Emma begins acting odd. At first Emma seems to be exhibiting signs of postpartum depression. But before Apollo can do anything to help, Emma commits a horrific act and vanishes. Thus begins Apollo’s quest to find a wife and child who are nothing like he’d imagined. His odyssey takes him to a forgotten island, a graveyard full of secrets, a forest where immigrant legends still live, and finally back to a place he thought he had lost forever.

“The thriller you won’t be able to put down.”—O: The Oprah Magazine

“By turns enchanting, infuriating, horrifying, and heartbreaking, The Changeling is never less than completely engaging.”—NPR

“A dark fairy tale of New York, full of magic and loss, myth and mystery, love and madness. The Changeling is a mesmerizing, monumental work.”—Marlon James, author of A Brief History of Seven Killings

“[A] bewitching masterpiece . . . Like a woke Brothers Grimm, his clever new spin on the ages-old changeling myth is a modern fairy tale for the Trump era, taking on fatherhood, parenting, marriage, immigration, race and terrifying loss.”—USA Today

“Intense, riveting . . . The story is a long, slow burn with a lingering sizzle.”—Los Angeles Review of Books

“A modern-day tale of terror rooted in ancient myth and folklore, brimming with magical revelation and emotional truth.”—San Francisco Chronicle
Read More
“The combination of Grimm-ish allusion and social commentary might seem pat in the hands of less capable authors, but [Victor] LaValle executes the trick with style. . . . LaValle has written a story full of things to terrify not children but the parents who lose sleep worrying about how best to protect them.”—Time

“One of the reasons to read Victor LaValle’s novels is the simple sentence-by-sentence pleasure of them—they offer hundreds of baby dopamine hits, tiny baths for the prose snob’s reward system. . . . LaValle’s observations about race remain, as ever, both stinging and mordantly funny. . . . And his imagery is a source of immense satisfaction. . . . If monsters are your subject, writing like an angel helps.”—Jennifer Senior, The New York Times

“[A] bewitching masterpiece. . . . Like a woke Brothers Grimm, his clever new spin on the ages-old changeling myth is a modern fairy tale for the Trump era, taking on fatherhood, parenting, marriage, immigration, race and terrifying loss. . . . LaValle impressively maintains his storytelling momentum throughout The Changeling. . . . He not only recaptures the need for fairy tales but makes his essential reading as well.”—USA Today (four out of four stars)

“Victor LaValle’s fabulist ode to fatherhood and fairy tales offers a new take on themes as old as time. . . . Throughout western mythology, white men with swords have been the heroes while the rest of us watch, oohing and aahing, from the sidelines. With his genre-bending novel, The Changeling, Victor LaValle updates the epic narrative for the twenty-first century.”—O: The Oprah Magazine

“Fiercely defies categorization. Written as a self-proclaimed ‘fairy tale’ in a punchy, inviting style, Mr. LaValle’s haunting tale weaves a mesmerizing web around fatherhood, racism, horrific anxieties and even To Kill a Mockingbird. And the backdrop for this rich phantasmagoria? The boroughs of New York.”—Janet Maslin, The New York Times

“I was frequently startled by The Changeling’s piercingly beautiful insights into parenthood, childhood, [and] adulthood. . . . By turns enchanting, infuriating, horrifying, and heartbreaking, The Changeling is never less than completely engaging. . . . It’s a book that makes me want to seek people out to talk about it, to share together our own stories of reading it.”—NPR

“Fans of the macabre can’t miss the latest offering from prolific horror master Victor LaValle, which hurls us into the most harrowing abyss imaginable: parenthood. . . . Definitely scarier than anything you’ll hear around the campfire.”—Vulture

“This is a perfect summer horror read.”—Houston Chronicle

“Like a good Coen brothers film, this genre-defying, achingly literate phantasmagoria of a novel will work every nook and cranny of the imagination, taking the reader to places we’re either too afraid to visit or never knew existed.”—Paul Beatty, author of The Sellout

“Absolutely compelling, completely thrilling, The Changeling overflows with menace, wonder, and beauty.”—Kelly Link, author of Get in Trouble
Read More

This Is The Author | Victor LaValle