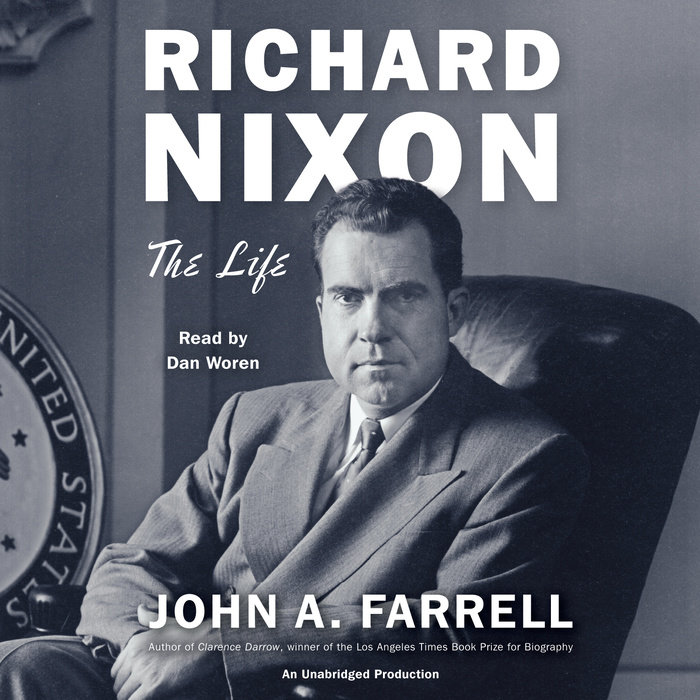 Written by: John A. Farrell
Read by: Dan Woren

From a prize-winning biographer comes the defining portrait of a man who led America in a time of turmoil and left us a darker age. We live today, John A. Farrell shows, in a world Richard Nixon made.

At the end of WWII, navy lieutenant “Nick” Nixon returned from the Pacific and set his cap at Congress, an idealistic dreamer seeking to build a better world. Yet amid the turns of that now-legendary 1946 campaign, Nixon’s finer attributes gave way to unapologetic ruthlessness. The story of that transformation is the stunning overture to John A. Farrell’s magisterial biography of the president who came to embody postwar American resentment and division.
Within four years of his first victory, Nixon was a U.S. senator; in six, the vice president of the United States of America. “Few came so far, so fast, and so alone,” Farrell writes. Nixon’s sins as a candidate were legion; and in one unlawful secret plot, as Farrell reveals here, Nixon acted to prolong the Vietnam War for his own political purposes. Finally elected president in 1969, Nixon packed his staff with bright young men who devised forward-thinking reforms addressing health care, welfare, civil rights, and protection of the environment. It was a fine legacy, but Nixon cared little for it. He aspired to make his mark on the world stage instead, and his 1972 opening to China was the first great crack in the Cold War.
Nixon had another legacy, too: an America divided and polarized. He was elected to end the war in Vietnam, but his bombing of Cambodia and Laos enraged the antiwar movement. It was Nixon who launched the McCarthy era, who played white against black with a “southern strategy,” and spurred the Silent Majority to despise and distrust the country’s elites. Ever insecure and increasingly paranoid, he persuaded Americans to gnaw, as he did, on grievances—and to look at one another as enemies. Finally, in August 1974, after two years of the mesmerizing intrigue and scandal of Watergate, Nixon became the only president to resign in disgrace.
Richard Nixon is a gripping and unsparing portrayal of our darkest president. Meticulously researched, brilliantly crafted, and offering fresh revelations, it will be hailed as a master work.
Read More
“Beautifully written and deeply insightful . . . A bracing portrait of a man untethered from principle and ideology, driven throughout his life to win at any cost and thereby palliate his deep-seated insecurities . . . Nixon was not an easy man to understand. And even now, his failures and accomplishments are not easy to classify. In Farrell’s capable hands, however, we see Nixon in his entirety—and we can’t help but wonder what he means for our politics today.”
—William Howell, San Francisco Chronicle

"[Nixon is] an electrifying subject, a muttering Lear, of perennial interest to anyone with even an average curiosity about politics or psychology. The real test of a good Nixon biography, given how many there are, is far simpler: Is it elegantly written? And, even more important, can it tolerate paradoxes and complexity, the spikier stuff that distinguishes real-life sinners from comic-book villains? The answer, in the case of Richard Nixon, is yes, on both counts.”
—Jennifer Senior, The New York Times

“A stack of good books about Nixon could reach the ceiling, but Farrell has written the best one-volume, cradle-to-grave biography that we could expect about such a famously elusive subject. By employing recently released government documents and oral histories, he adds layers of understanding to a complex man and his dastardly decisions . . . Outstanding.”
—Aram Goudsouzian, Washington Post

"With a mix of morbid fascination and deep empathy, Farrell humanizes Nixon, but he doesn't let him off the hook . . . The dichotomy between brooding schemer and extroverted leader has long defined the Nixon dynamic. But with Richard Nixon, Farrell has etched those history-shaking contradictions into the most vivid—and the most startling—relief to date."
—Jason Heller, NPR.org

“An extremely valuable introduction to the life and times of one of our most consequential presidents. Farrell gives us a Nixon rich in both character flaws and great accomplishments, the latter fueled by his transformational vision. It’s a worthy look at a fascinating president.”
—Ray Locker, USA Today

“Though there have been many previous books about Nixon, Mr. Farrell’s comprehensive, one-volume biography is welcome . . . In lively, vigorous prose, he takes readers through Nixon’s career, offering incisive judgments and revealing details along the way.”
—Robert K. Landers, Wall Street Journal

“Superb . . . the most formidable attempt yet made to put Richard Nixon in perspective.”
—Steve Donoghue, Christian Science Monitor

“Farrell is an exceptional writer . . . It may not have been Farrell’s intent to produce a cautionary tale about the dangers of a presidency run aground on lies, paranoia, prejudices, and delusion, but that’s what he’s accomplished.”
—Publishers Weekly, starred review

“Farrell’s blockbuster portrait of Nixon is revelatory—filled with fresh reporting shedding new light on the roots of our own dark political moment. He shows that dirty tricks, October Surprises, and anti-elitist resentment were among the gifts Nixon bequeathed to our own presidential politics.”
—Jane Mayer, author of Dark Money: The Hidden History of the Billionaires Behind the Rise of the Radical Right

“John A. Farrell has once again delivered a rich, precisely written portrait of the past to help us understand the present. He traces the origins and turning points of one of the most complex, complicated and fascinating presidents of the modern age with flair and narrative skill. Each page is a joy to read, on the way to a very satisfying whole.”
—John Dickerson, moderator of CBS’s Face the Nation and author of Whistlestop

“Brilliant, ruthless, a president who combined some enlightened policies with inner darkness, Richard Nixon stands alone in the history of American politics. John A. Farrell’s gripping account vividly captures Nixon from his earliest days—catapulting to Congress with a cold-blooded debate stunt—to the mounting crises he faced in the White House, culminating in his spectacular fall.”
—T.J. Stiles, Pulitzer Prize-winning author of Custer’s Trials and The First Tycoon

“In Richard Nixon, John A. Farrell is tough and unyielding, yet gives his subject a fair hearing through each gripping episode. ‘I’m not a quitter,’ Nixon once protested, and this grand, indispensable book proves him right, right to the end.”
—Chris Matthews, author of Kennedy & Nixon: The Rivalry that Shaped Post-war America

“Jack Farrell gives us two profoundly resonant Richard Nixons—the last progressive Republican, and the author of our national divisions. He also gives us, in one engrossing volume, the defining biography of our darkest president.”
—Larry Tye, author of Bobby Kennedy: The Making of a Liberal Icon

“With clarity and verve, John A. Farrell’s deft pen illuminates the life of America’s 37th president. Unsparing yet fair-minded in its analysis and based on deep research in a wealth of archival and published sources, Richard Nixon is a fast-moving and penetrating portrait of this controversial and complicated man.”
—Fredrik Logevall, Pulitzer Prize-winning author of Embers of War

“John A. Farrell's Richard Nixon: The Life is an expertly written and strikingly comprehensive portrait of America's most complicated president. Farrell has a genius for the telling anecdote and apropos quote. His command of the sources is staggering. Richard Nixon is a true landmark achievement.”
—Douglas Brinkley, Professor of History at Rice University and author of Cronkite

“Full of fresh, endlessly revealing insights into Nixon’s political career, less on the matter of his character, refreshingly, than on the events that accompanied and resulted from it.”
—Kirkus Reviews, starred review

“A probing biography . . . Readers track the lonely and hard-won ascent of a sickly, love-starved child, who dreams like a Romantic but maneuvers like Machiavelli . . . An unflinching portrait.”
—Booklist, starred review
Read More