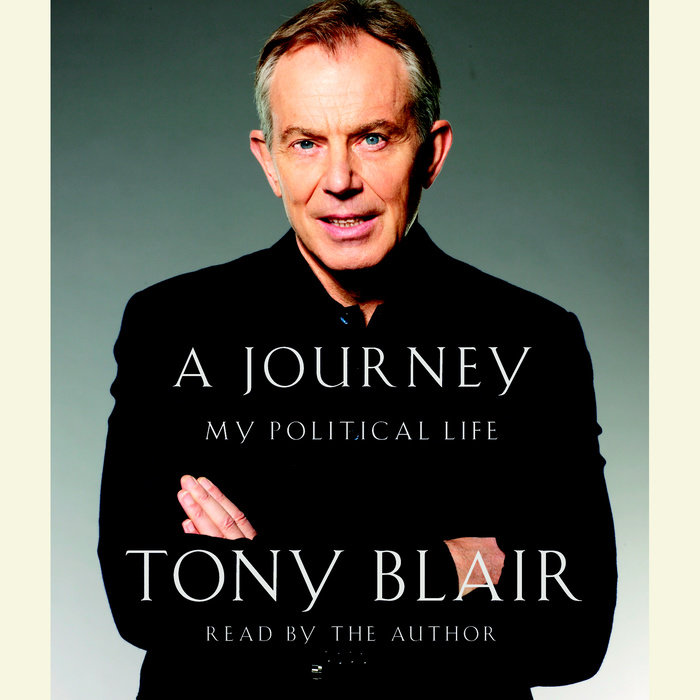 Tony Blair is a politician who defines our times. His emergence as Labour Party leader in 1994 marked a seismic shift in British politics. Within a few short years, he had transformed his party and rallied the country behind him, becoming prime minister in 1997 with the biggest victory in Labour’s history, and bringing to an end eighteen years of Conservative government. He took Labour to a historic three terms in office as Britain’s dominant political figure of the last two decades.

A Journey is Tony Blair’s firsthand account of his years in office and beyond. Here he describes for the first time his role in shaping our recent history, from the aftermath of Princess Diana’s death to the war on terror. He reveals the leadership decisions that were necessary to reinvent his party, the relationships with colleagues including Gordon Brown, the grueling negotiations for peace in Northern Ireland, the implementation of the biggest reforms to public services in Britain since 1945, and his relationships with leaders on the world stage—Nelson Mandela, Bill Clinton, Vladimir Putin, George W. Bush. He analyzes the belief in ethical intervention that led to his decisions to go to war in Kosovo, Sierra Leone, Afghanistan, and, most controversially of all, in Iraq.

A Journey is a book about the nature and uses of political power. In frank, unflinching, often wry detail, Tony Blair charts the ups and downs of his career to provide insight into the man as well as the politician and statesman. He explores the challenges of leadership, and the ramifications of standing up, clearly and forcefully, for what one believes in. He also looks ahead, to emerging power relationships and economies, addressing the vital issues and complexities of our global world.

Few British prime ministers have shaped the nation’s course as profoundly as Tony Blair, and his achievements and his legacy will be debated for years to come. Here, uniquely, we have his own journey, in his own words.

“Instructive—particularly on the art and discipline of centrist leadership.”
-John Avlon, Favorite Books of 2010, The Daily Beast

“Especially welcome.  Luckily A Journey is not one of those leaden bricks of official reminiscence.  The tone is confiding, informal and forthright . . . A Journey is a deeply personal book, full of candid revelations . . . It provides a priceless glimpse into the mind of the man who devoted himself to the transformation [of the Labour party]—and who stood by America in some of its darkest recent hours.”
-Martin Rubin, The Wall Street Journal

“Engaging and insightful . . . A better than usual contribution to the literary genre of political memoir.”
-Claude R. Marx, The Boston Globe

“Well-written and perhaps unintentionally self-revealing . . . Blair reveals himself through his thrusting political ambition, his rationales for decisions, his preoccupation with public image and his determination to play a prominent role on the world stage.”
-Leonard Downie Jr., The Washington Post Book World

“Engrossing . . . Blair writes honestly and openly. The style is not the elegant Oxbridge prose that might have been expected of a former prime minister but one filled with Americanisms. It is breezy, informal and candid enough to keep the reader thoroughly engaged.”
-Fareed Zakaria, The New York Times Book Review

“Fluently written . . . Engaging . . . Some of the most quoted bits of this book will doubtless include Mr. Blair’s thumbnail sketches of colleagues and acquaintances.”
-Michiko Kakutani, The New York Times

“That Blair was a formidable politician can be seen in the glimpses we get of how his mind works . . . You are left thinking two things: that it would be a blessing if some of today’s politicians took note . . . and that, whatever your view of Blair, you still wouldn’t want to take him on in an election.”
-John Lanchester, The New Yorker

“A political biography of unusual interest . . . Blair is one of the great politicians of this generation and that makes his candid moments particularly interesting.”
-Tim Rutten, The Philadelphia Inquirer

“Uncommonly candid . . . A vividly rendered account of life in office, with plenty of beneficial pointers to aspiring politicos on either side of the Atlantic.”
-Starred review, Kirkus

“Discerning . . . Behind the scenes in the halls of power is always an interesting place to go, and Blair takes us there with delight on his part and on our part.”
-Booklist

“Blair’s candor can be bracing.  He paints comic scenes of excruciating audiences with dull dignitaries and the weekly torment of Prime Minister’s Questions . . . and never hides his preoccupation with image-crafting and media relations.  Blair reveals himself to be savvy, charming, and sometimes earnest and impassioned.”
-Publishers Weekly